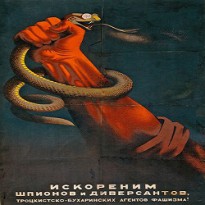 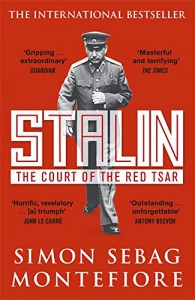 Montefiore's history of Jerusalem happened to be the first book I reviewed on Booklikes and I was happy to revisit the author with another one of his works. It seems that every time I pick up a history book in a book shop it is endorsed by Montefiore, he's clearly very passionate in his pursuit of historical knowledge.

This book centres around Stalin and his changing inner circle. It's an odd blend of details of dinner functions, Stalin's character in calm times and the chronicles of the terror and his political brutality. It's a fascinating glimpse into the sycophantic fervour he fostered amongst his magnates and the cunning, horrific nature of his paranoid mind. I've given it five stars, because probably fittingly, after Kershaw's Hitler this is simply the best biography of a historical leader that I have read.

Anyone who harbours any romanticism or flirts with the hard left I advise to read this and recognise the dangers of unswerving idealism, the dangers of being an illiberal bent on realising a utopia for humanity in the future at any cost to the people of this life. I had always thought that Stalin wasn't overly ideologically motivated, yet this book seeks to dispel that notion comparing the avidity of Stalin's belief in Marxism to that displayed in radical Islamists.

Something touched upon in the book and spoken about in debates by Christopher Hitchens is the idea that the Tsar in Romanov times was the voice of God himself, understand that and you may be able to understand the cult of personality that Stalin was able to engineer and take advantage of. The idea of a strong, powerful leader was ingrained into Russian society and it is an interesting feature of the revolution, that despite its attempts to turn society on its head with the ultimate goal of Communism, the aura of leadership remained steadfast.

It fascinated me that the sons and daughters of some of those murdered and tortured beyond repair on Stalin's orders still regarded him as a great leader. It is unfathomable to me that it is possible to inspire such unswerving loyalty amongst people. This is ultimately what draws me to these immensely flawed and yet ridiculously charismatic characters. There seems to be men and women who pop up from time to time under varying banners of ideology, be it religious/political who manage to cultivate vast followings and impact the course of human history through their actions.

And so I came to the end of the book having lived within the court of the red tsar through the eyes of his vicious inner circle and I was struck again by the surreal nature of it all. How terrifying is it? If you place enough power into the hands of the wrong person you can end up with a society in which an innocuous comment could result in years of torture and imprisonment or a painful death. How is it that a man so well read and intelligent as Stalin, uses that intelligence to create a cut throat, savage society in which even those closest to him are not safe from assassination?

I guess my curiosity will never be sated.

The Enlightenment, and why it still matters
Anthony Pagden
Progress: 250/436 pages